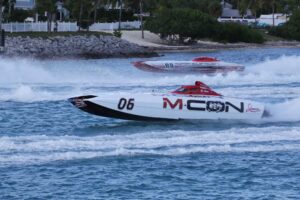 The American Power Boat Association Offshore National Championship Series, Thunder On Cocoa Beach set records with this years venue. There were 10 teams registered in each category. The water was rough and the wind was blowing, but racers were still excited to be back on the water. Continue reading below to find out more about the event.

The first race of the inaugural American Power Boat Association Offshore National Championship Series, Thunder On Cocoa Beach attracted a then-event-record 59 boats in 2019—more than double the fleet size of the previous year for the Florida venue. With 60 boats registered for tomorrow’s four races, officially tops that record and bodes well for the rest of season, especially given that none of the overseas Class 1 boats are competing and the Supercat-class—also thanks in part to the headaches of international travel—is down to three entries.

With 10 teams registered in each category, Super Stock and Bracket 600 are the largest classes in the field. On the flip side, there are two solo-entry classes—the new-for-2021 450R Factory Stock class with the Team MTI 390X catamaran and Knucklehead Racing in the V Extreme class, a once-thriving category that has been steadily declining for years.

In the Stock V class, five teams are registered while six are signed up in Mod V, it’s more powerful single-engine V-bottom counterparts. A hodgepodge of sorts, Class 1 includes the Miss GEICO catamaran, the SilverHook V-bottom and SV Racing, a 39-foot Outerlimits Offshore Powerboats catamaran bumped up to Class 1 as the team is running Mercury Racing 860 engines this season rather than class-spec power.

But the biggest story of the day, one that will carry into tomorrow, was the rough water and gusty winds for the practice session.

“The water was ‘super sporty’ today—the waves looked to be strong four-footers with the occasional five- to six-footer sneaking up on you,” said Tyler Miller, the owner and throttleman of the M CON team, which calls the Lake of the Ozarks in Central Missouri its home-water. “Our Skater 388 felt very solid and flew flat, which was the basis of our testing today as I have yet to race in a boat that small. I always enjoy the more challenging water conditions. They keep you mentally focused and demand that you stay on top of your game.

“And we’re so glad to be back to racing,” he added. “It’s been a pleasure to see all of our racing families and all of the fans again.”

Another Lake of the Ozarks-based racer, rookie 450R Factory Stock-class driver Taylor Scism practiced today with powerboat racing veteran Shaun Torrente, who also is running his CMR-backed 32-foot Doug Wright in the Super Stock ranks. Torrente is stepping into the cockpit of the 39-foot MTI catamaran as John Tomlinson, the team’s planned throttleman, is throttling Canada Homes with offshore racing legend Loren Leibel in the Supercat class. (Though Team MTI is running as a 450R Factory Stock boat, it’s now running with the Supercat and Class 1 teams tomorrow.)

Scism got her first taste of the Cocoa Beach rough stuff today.

“Going out the inlet was probably the roughest area, but once I got a feel for the waves it was a lot better,” she said. “Hopefully it’ll lay down a little bit for tomorrow.”

-Click here to read complete and original article from speedonthewater.com-