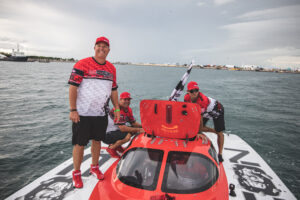 The 2021 RWO/UIM World Championships are behind us and what a year it has been for our M•CON Racing team. From start to finish we’ve had immense success and had such a great time meeting all of you, our supporters, and racing all across the United States. With that being said our desire to get back to Key West after a year off was palpable as our driver Tyler Miller put it best.

“The buildup and anticipation are through the roof for our entire team. A year away from Key West coupled with an amazing group of Supercat teams is setting the stage for some great racing.” – Tyler Miller

Our world championship bid started with a bang winning the first race of the week. Here is a quick recap of the Wednesday action from speedonthewater.com.

The final race of the day saw the M•CON team quickly run away from the six-boat Supercat-class pack. Joined by driver Myrick Coil, fresh off a Super Stock-class victory less an hour earlier, Tyler Miller throttled the Skater Powerboats 438 catamaran powered by Sterling Performance engines to a 35-second lead over Lorne Leibel and John Tomlinson in Canada Homes, which created roughly the same gap over John Emmons and Jimmy McIntyre in Chariots of Fire. And that was how they finished.

M•CON’s Tyler Miller and Myrick Coil dominated the Supercat class today. Miller was quick to credit his crew and his driver.

“Myrick drove his ass off today and we couldn’t be more happy, and the boat was set up about as good as you can get on the first day of Key West. The boat just lit it up. It was pretty calm, pretty flat out there. The win on Wednesday is great but we have two more days of racing ahead of us. The team did an awesome job of getting us set up and ready to go.” – Tyler Miller

Moving to race number two and our domination continued with yet ANOTHER victory, again here is a recap from speedonthewater.com

It was M•CON’s second win of the week, which puts the team in a hard-to-beat position heading into tomorrow’s longer, double-points contest. M•CON prevailed in a tight battle with Canada Homes.

“That was the most intense and fun race I’ve ever been a part of; it was unbelievable. My arm was numb by the time we got to the end. We battled the whole time and it worked out in our favor. Halfway through the race we knew coming out of the harbor turn that we were making up some ground on them. We could feel the fuel burn and the boat starting to lighten up. I was able to run it a little looser from that point and we started making up ground. It really was a combination of water conditions and setup. The Key West track is so unique—every condition in offshore racing is on this track. Long straights, tight turns, tailwinds, huge holes, bumpy stuff, you name it.” – Tyler Miller

That the M•CON team earned this year’s Supercat-class national title in the APBA Offshore National Championship Series didn’t dull Miller’s enthusiasm for the sport one bit.

“My hat’s off to Myrick, he drove unbelievably well,” he added. “He’s been at this for so long and he told me as long as we kept charging we were going to get them. All I know is that we were staring ahead at J.T. and Lorne—two legends—waiting for them to make a mistake and that just wasn’t going to happen. But Myrick was right. We caught them, I think on the sixth lap, and didn’t look back. That was so much fun to be able to see Myrick and Johnny battle it out in opposite boats. I’ll remember this race forever.” – Tyler Miller

Finally came race number three and the final day of action. Headed into the race with a significant points lead all we needed was a calm race and to finish. Unfortunately for our entire M•CON team we had a mechanical failure cut us out of the race and subsequently the championship fight.

A smart betting person would have picked M•CON to take home the Supercat-class world title after dominant wins on Wednesday and Friday. But then, smart people don’t bet on offshore racing given the nature of mechanical things such as propeller shafts, which have been known to break in competition. And that was exactly what knocked M•CON’s Tyler Miller and Myrick Coil out of today’s Supercat contest and contention for a world championship.

It was such a gut-wrenching blow to an otherwise flawless effort to win the championship but in the end you’ll always need a little luck in racing and this weekend we just didn’t have it. So thankful to all of our supporters for the incredible week long outpouring of admiration. We appreciate each and every one of you and are thankful for how enjoyable you have made this year. Thank you to our entire crew for all the hard work and we know we’ll be back for the next race better than ever!

Miller And Coil Heading To The APBA Hall Of Champions
January 25, 2023