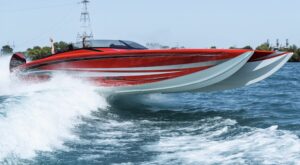 MCON’s own Tyler Miller will be in a challenge to set a new Dam-to-Dam speed record against MTI on Monday before the LOTO Shootout Week begins. Both teams have decided to use this as an opportunity to donate to charity and all of the proceeds from MCON will be going to Kid’s Harbor Inc, a child advocacy center. Click here to donate and for more information, continue reading.

Powerboat racing fans are once again looking forward to the Dam-to-Dam challenge at the Lake of the Ozarks Shootout. Speedonthewater.com, a popular powerboating news site, shares information about the upcoming event.

Inspired by last year’s unsuccessful Dam Challenge attempt that brought some added attention to the popular Lake of the Ozarks Shootout in Central Missouri, two local race teams are gearing up to tackle the 188-mile endurance run from Bagnell Dam to Truman Dam and back with the goal of breaking a record and, more importantly, raising money for charity.

In three weeks, M CON Offshore Racing team owners Tyler and Lindsey Miller, the Kansas-based performance boaters who put a spotlight back on the Dam Challenge with their 2021 attempt in their Skater Powerboats 368 catamaran to break the previous record of 2 hours, 29 minutes and 49 seconds that was set in September 2014, are going to be joined by the MTI-backed TS Motorsports team of Taylor Scism and her father, MTI founder Randy Scism.

These record attempts are being conducted to raise money for the Shootout charities, Kids’ Harbor and Make a Wish. Speedboat.com shares more about MCON’s decision to race and why they chose to support Kids’ Harbor.

“We decided to work together on it this time and do some work for charity,” Miller tells Speedboat. “Taylor reached out to me and said, ‘Hey, I know you guys did it last year. We’d like to like to do it during Shootout Week and see if we can raise some money for charity this year.’ So during the recent PBC Outboard Fun Run dinner, we talked some more about it and decided to promote it as a small Skater versus MTI event and just have fun with it, just to raise some more money for charity.”

Miller’s proceeds will benefit Kids’ Harbor, a child advocacy center serving the Lake of the Ozarks area in Central Missouri, Fort Leonard Wood, and surrounding areas. The agency assists victims of child abuse and their safe caregivers as they make their way through the difficult and often frightening process of a child abuse investigation.

“Kids’ Harbor is so thankful for the continued support from the Lake of the Ozarks Shootout,” says Cara Gerdiman, executive director of Kids’ Harbor. “We’re thrilled that M-CON chose, and will race to benefit, our mission to provide coordinated response, healing and prevention of child abuse in our community. This support helps to ensure Kids’ Harbor remains a shining light through the storm of abuse.”

Original and complete article’s published on speedonthewater.com and speedboat.com

Donate any amount below to join us in supporting the Kids’ Harbor Child Advocacy Center!! We truly THANK YOU for your support!